Top 5 places to in Las Vegas on the Go! 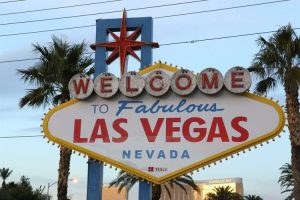 My husband and I take an annual trip to Las Vegas each December and we stay for several days. There is one thing that you can count on with Vegas, and that is that there is never enough time to see or do it all!

This time, we decided to spend more time doing activities off of the strip and we always pick a few new restaurants to try. I have shared our photos of the Grand Canyon visit on social media over the past couple of weeks, but not the great food! Las Vegas is a foodie’s dream come true and I have compiled a list of my top 5 places to eat from this trip on the go.

1). The Wicked Spoon… The wicked spoon is not just a buffet in the Cosmopolitan Hotel, but a culinary food hall that serves everything from fried chicken to ox tail pho. I have eaten here three times and can honestly say that it is the best buffet that I have eaten at not only in Las Vegas, but anywhere! The pricing is not bad either. Adults start at $27 and kids start at $16. You can get a meal to go for $20 and bottomless beverage packages for $15. Click here for more info: https://www.cosmopolitanlasvegas.com/restaurants/wicked-spoon

2). Giada at The Cromwell… In my opinion, Giada’s has the best view of the strip and we had the best seat in the house this visit. All pasta is made fresh in house and the signature lemon pasta is a must have. Save room for the complimentary bread plate and cocktails. Also, make sure that you stop by the photo booth in the lobby before you leave. https://www.caesars.com/cromwell/giada#.WF1YZ2XHWRs

3). Secret Pizza… Secret pizza is very hard to find if you don’t know where to look for it, but it’s in the Cosmopolitan hotel on the third floor. It is cheap and open from 11:00am until 5:00am. Secret Pizza is the perfect late night hang out spot to get food after a show or a night in the casino. They serve NY style slices for $5-$6 and you can’t go wrong with that. https://www.yelp.com/biz/secret-pizza-las-vegas

4). Burger Bar by Hubert Keller… Burger Bar Las Vegas is owned by celebrity chef Hubert Keller, and is located in Mandalay Place, in the mall between Mandalay Bay & Luxor. Burger Bar is very laid back with a pub like atmosphere. They serve organic burgers and boozy shakes. No reservations required. Check them out here: http://www.burger-bar.com/lv_main.php

5). Egg Slut!!! Egg slut went from being the number one food truck in America (based in L.A.) to becoming a restaurant with a few locations. Luckily there is one inside of the Cosmopolitan Hotel. My favorite dish here is the Bacon, Egg & Cheese Sandwich, made with hardwood smoked bacon, an over-medium egg, cheddar cheese and chipotle ketchup, served in a warm brioche bun. For more information, visit their website here: https://www.cosmopolitanlasvegas.com/restaurants/eggslut

Last week on instagram, I mentioned a company by the name of Jaeci.com that came out and and gave us a personality quiz to help us determine our spirit animal. I am a honey bee and my husband is a Giraffe. We received beautiful necklaces from the company with cards that show the meaning. Take your personality quiz here: https://www.jaeci.com/spirit-animal-1-1/ 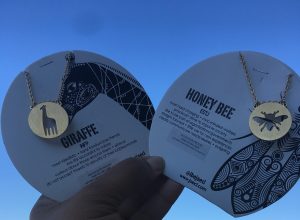 We always have a great time in Vegas and never have enough time to see and do it all. I hope that you have a Merry Christmas and Happy Hanukkah. My daughter turns two on December 29th and I look forward to turning up at home in my pajamas for the new year with the family along with a bottle of Sweet Bitch wine.

I recently launched my very own line of Live. Love. Travel. passport covers and I cannot wait to share them with you. 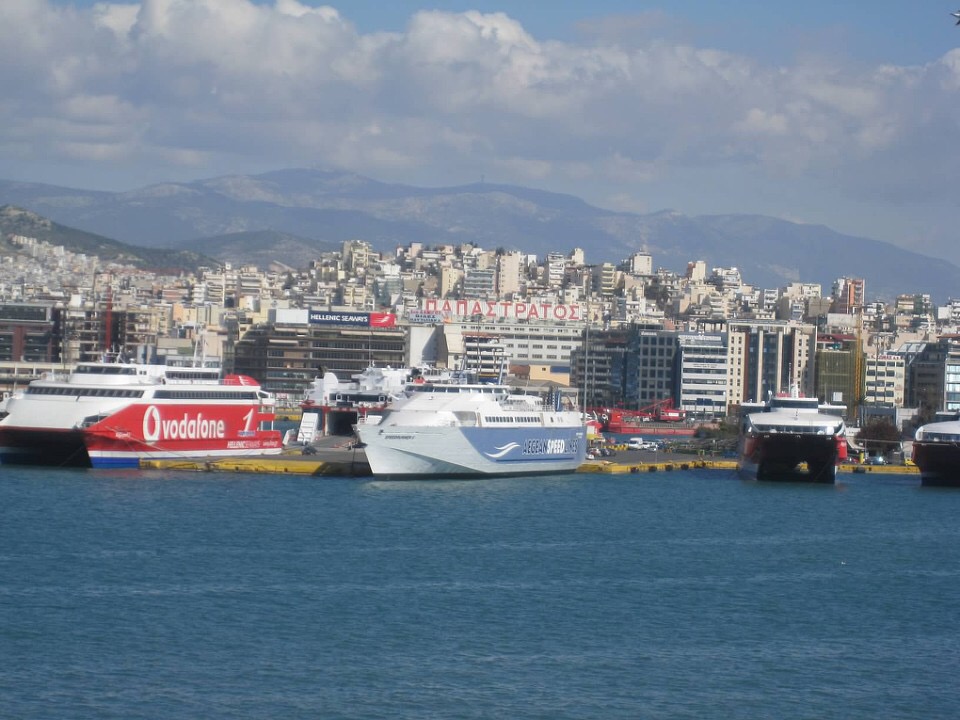 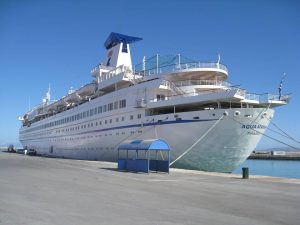 When I first started traveling, Santorini was one of the first destinations on my bucket list. My husband was down to go anywhere I wanted to, so I started doing my research. The journey to Santorini, Greece would be a long and expensive one that would involve several flights, a ferry and possibly a donkey. I kept looking. One afternoon, I found this website that offered Mediterranean cruises to the Greek Islands, including our flight and Santorini for half the price. Sold!

We booked an 8 day cruise with Gate 1 travel that departed from Athens Greece, and made stops in Mykonos, Kusadasi Turkey, Patmos, Rhodes, Crete and Santorini.

We arrived in Athens around noon and we were greeted by a Gate 1 driver that transported us to our hotel. We had the day to explore Athens on our own. Our driver took us through the city center and pointed out the Panathenian Stadium, the President’s residence, the ruins of the Temple of Zeus and Hadrian’s Arch, built to celebrate the arrival of the Roman Emperor Hadrian. When we checked in, and we had a nice handwritten note from our tour guide waiting for us at the desk, welcoming us to Greece. He gave us instructions for the next day and invited us to a welcome cocktail reception for the Gate 1 travelers later that evening. We dropped our bags off in the room and headed out! Our hotel was close to the major attractions, so we got a map and started walking and hiked up to the Acropolis.

The next morning, we all met in the lobby and got on a bus to transfer to the port in Piraeus to board our ship. Our ship was from the Celestyal Cruise line. It was a smaller ship and each room had twin beds only. Take your computer and pre- download movies or other entertainment that does not require the use of wifi while on the ship. Live cultural entertainment is available each night after dinner. Our best meal on the ship was breakfast each morning and the greek salad at dinner whenever we had it on board. Your best dining experiences will be on each island. 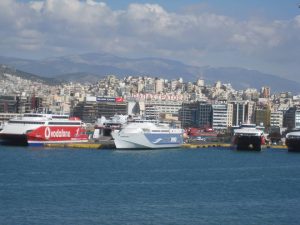 Our first stop was Mykonos. We spent the day exploring the island on our own. I bought cases of olive oil for everyone and we had dinner at the best restaurant by the sea, called “Mamakas”. We drank Ouzzo and enjoyed authentic Greek food before heading back to the ship.

The next morning, we arrived in Kusadasi Turkey. Kusadasi is known for its significant historical and religious sites, including ancient Ephesus. We toured the archaeological site of Ephesus, home to the Library of Celsus and Fountain of Trajan. Ephesus is also said to be the final resting place of the Virgin Mary. Ephesus was one of the seven churches of Asia that are cited in the Book of Revelation.

Our next stop was the small island of Patmos. Patmos is steeped with intense spiritual character, which inspired St. John the Divine to write the Book of Apocalypse. Patmos was beautiful and so sacred. You could feel the vibe as soon as you set foot on the monastery where John wrote the book of Revelation. We were not allowed to take pictures inside here, but I did buy a cross and oil that had been blessed by the Monks. We only spent a half day here and headed back to the ship early to set sail to Rhodes.

Rhodes is the largest of the Dodecanese Islands. When we arrived, we were on our own, so we hired a tour guide for the day for about $10 usd. They stand out at the port and wait for the cruise ships to come in. It was a rainy day in Rhodes, so we chose to do our tour by car only and get out along the way to take photos. We Drove along the coastline to the town of Lindos, overlooking the bay. We also drove to the Acropolis of Lindos and Temple of Athena before heading back to the city of Rhodes. We saw the ruins of ancient Rhodes and walked around the medieval Old Town to see the Palace of the Knights before heading back to the ship.

We cruised overnight to Crete. Crete is the largest of the Greek Islands. Crete’s history is highlighted by the ruins of the Palace of Knossos. The Palace of Knossos was the ceremonial and political center of the ancient Minoan civilization and residence of the mythical King Minos. Here, the mountain caves are thought to be the legendary birthplace of Zeus, according to Greek mythology.

Our final day cruising the Greek Islands is here and we have arrived in Santorini! Santorini’s harbor, the island’s distinctive caldera, was formed thousands of years ago by one of the most devastating volcanic eruptions in history. This event, which created the island’s placid harbor, is believed to have led to the demise of the ancient Minoan culture and inspired several Greek myths. We had to disembark in the middle of the sea and get onto smaller boats that take us over to the side of the cliff on the island. From there, we took cable cars up to the top. People can also ride donkeys to the top of the island.

From Santorini, we cruised back to Athens and we had a transfer to the airport. We had a connecting flight in Paris that allowed us to stay overnight which was a bonus. We arrived right before sunset and hit the ground running. I had visited Paris a couple of years before this trip, so I was familiar with the landmarks that we wanted to visit and the route that I wanted to take to get us there quickly. We stayed in the Opera district and used the train/ subway system to get around after we checked into our hotel. We stayed at the Mercure Paris Opera Garnier Hotel and the staff was amazing. We told them that we were celebrating our anniversary and they upgraded us to a suite.

This was one of the best vacation experiences that I have had and another example of how cruising is a great way to travel. We saw so many of the islands plus Paris for a fraction of the cost and during one visit (one airline ticket). If you have not cruised yet, go for it!

I will be traveling to Las Vegas next week with my husband on our annual trip. I hope to spend some time off of the beaten path this time and see the city and state from a different perspective.